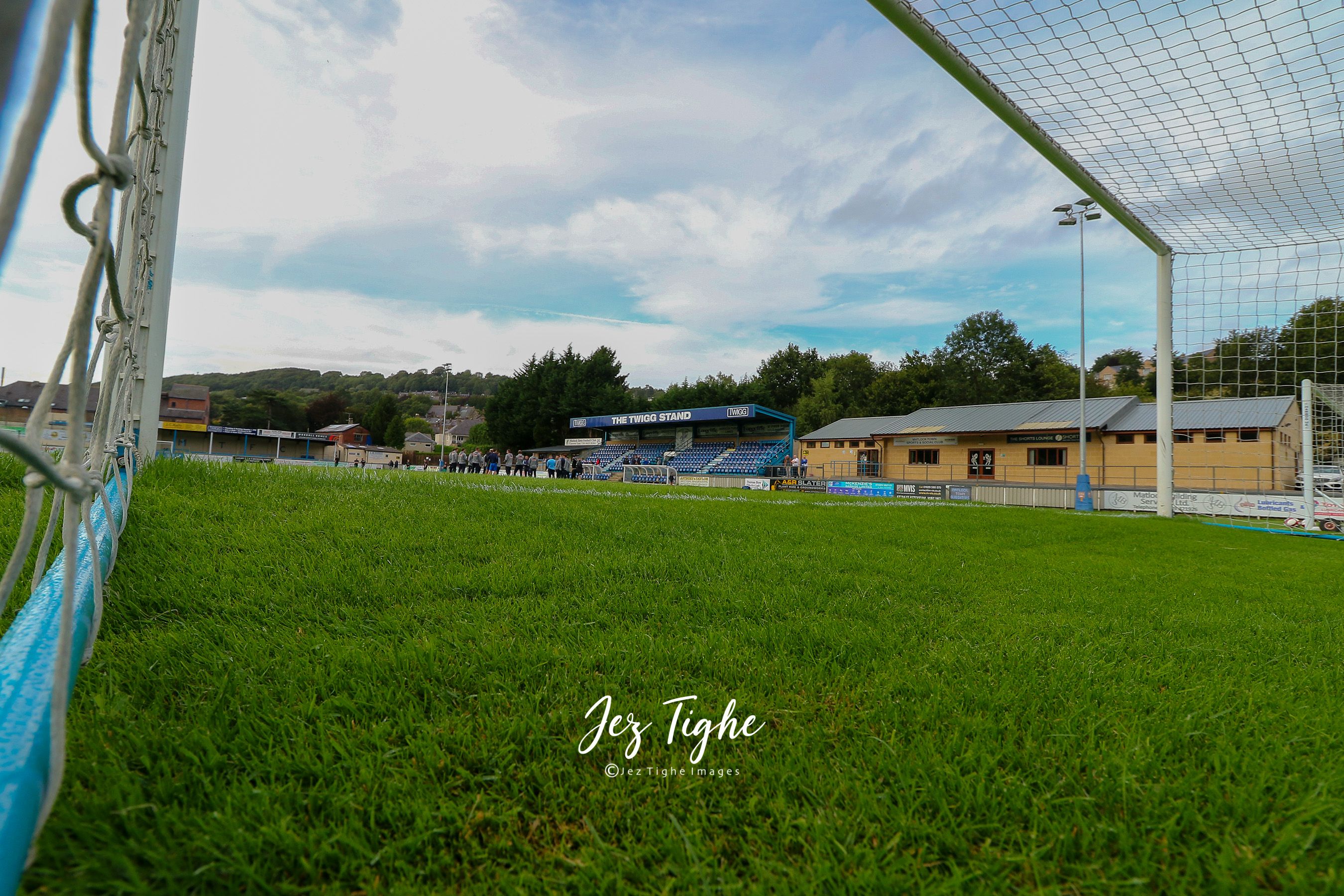 Matlock Town’s efficiency in defence was praised by manager Paul Phillips after another clean sheet, their fourth in six competitive matches this season, paved the way for FA Cup progress at Grantham Town last weekend.

A lovely strike from substitute Callum Dolan with eleven minutes remaining gave the Gladiators their victory but Phillips says the work of his defensive unit was equally praiseworthy and vital in securing the 1-0 win.

The game was far from being a classic in wet conditions, in fact it was what Phillips probably expected.

“You always get a physical game against teams managed by Macca (Martin McIntosh) and Tim Ryan. It wasn’t a great spectacle, you can instil all you want in people about playing attractive football, of course we want to do that, but if you haven’t got that steel and resoluteness at the back then you aren’t going to win football games. Our back five or so were magnificent, they won all of the first and second balls, We know we could do with that twenty goal striker and we’re continuing to work on that. Callum and Danny Greenfield might get the stardust for the winning goal but without that great defending we wouldn’t have been in that position to score the only goal. The only time we’ve been a bit sloppy defensively was against Basford when they switched off twice. Otherwise they’ve been top class, I take my hat off to them.”

Phillips and fans alike will be hoping that his goal will give Dolan the confidence to go on and add to his tally after missing chances in earlier games.

“Callum Dolan’s a very good footballer, he can do things a lot of other players can’t do, he’s a natural born attacker, he’s just got to learn it’s also what you do off the ball that counts, he’s got to realise that and when he does he’ll be some player” Phillips added.

The Gladiators are currently in talks with National League North Gateshead about extending Greenfield’s loan which expired after the Grantham game, or even trying to draft him in on a permanent basis. Greenfield was in the Heed starting line up which won their opening league game of the campaign at Bradford (Park Avenue) on Monday night, but Phillips says talks will continue.

“I’m still talking to Gateshead with a view to getting him back. It’s obvious that playing games has done him the world of good and I reckon it’d be better for him to be getting regular football in with us than being on the bench. If Gateshead end up playing him regularly then good luck to the kid, it’s at a higher level and we wish him all the luck in the world for he’s a fantastic lad. We want him back with us if possible, the ball’s in Gateshead’s court at present.”

Phillips was full of praise for Greenfield particularly on Saturday when it emerged after the game that Greenfield’s sister had passed away due to cancer during the week.

“It was very courageous of him to want to play, he never said anything before the game, nobody knew anything about it. I only became aware when Mark Lees texted me to say had I seen a tweet from Danny dedicating the win and his assist to his sister. Obviously I then got in touch with him and he knows that he’s got the support of everyone in the dressing room and at the club at this very difficult time for him. It shows his maturity and also his character, he just wanted some form of normality after the awful week he’d had.”

Matlock’s reward for beating Grantham is a trip to National League North Guiseley on Tuesday night (13 October), a game which at this stage will be played behind closed doors due to Guiseley’s elite status, a circumstance that upsets Phillips.

“I think both teams will be disappointed with the draw if I’m honest although it’s winnable for both clubs. I think we can go there and give a good account of ourselves, there’s no real pressure on us being away to a club in a higher league. The sucker punch though is having no spectators there which kills an FA Cup game, it takes away the magic of it all, particularly for our supporters who were there at Grantham in numbers on Saturday and gave us such great support”

Clubs are currently hoping that there will be a change of mind from the powers that be with regard to fans being admitted at Nethermoor and other similar venues.

Guiseley signed former Matlock defender Ashton Hall on loan from Sheffield United on Tuesday, and he made his debut for the Yorkshire side as a substitute in the 4-0 home win over Blyth Spartans.

The Gladiators return to league action this weekend as Ashton United visit the Proctor Cars Stadium on Saturday (3pm).

Phillips and a number of current Matlock players will be facing one of their former clubs.

“Whether I’m looking forward to it depends on whether we win or not” joked the Matlock boss.

“I had some great times at a great club in Ashton but I’ve moved on and so have Ashton. There’ll be some familiar faces that I’m looking forward to seeing again but there’s also a lot of new faces with the change in ownership. They’ve spent money and have some very good players and I feel they could have a real go at going up this season. They’ll obviously be smarting from the South Shields result in the FA Cup last Saturday but it’ll be a tough game, one in which we can find out where we are in terms of our progress. It’s a game we’ll be looking forward to, we’ll be preparing hard, watching them in midweek and doing our homework as we hope to pick up three points.”

Phillips’ latest recruit, Congolese midfielder Cesaire Lingouba, who joined from Witton Albion, is likely to be part of the Gladiators squad for the first time.

Matlock go into the game in tenth spot with four points from three league games so far, Ashton having a point advantage in eighth spot following an unbeaten league start consisting of a win at Stafford on the opening day followed by home draws against South Shields and last Tuesday against Bamber Bridge.

The Gladiators are still seeking extra volunteers to help with stewarding and other roles at home matches given the Covid-19 measures currently in place. More information is available from Chairman Bryn Apperley on 07795 377893.