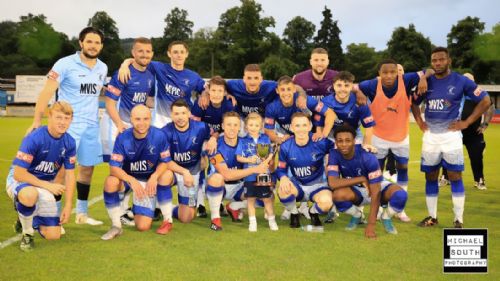 Twenty four hours after his final appearance in a Matlock Town shirt, legend Adam Yates said “it has finally sunk in”.

Yates was of course referring to the end of his playing career in which he made in excess of 500 appearances for the Gladiators before announcing his retirement during the summer.

That game was the Wirksworth Centenary Cup victory over Wirksworth Ivanhoe to celebrate Ivanhoe’s 100th birthday which Matlock won 9-0.

“I think everyone will agree that it was a special evening and I’d like to thank everyone at the club and the players of both sides who were magnificent. I kept saying last night it hadn’t sunk in but now it finally has. I got a bit emotional as it was the last time I’d be playing at The Lane.”

Yates says he has received loads of messages of goodwill.

“I’ve been listening and looking to lots of messages on social media and by text from current players and those I’d played alongside in the past, it was really nice to get them. It’s now sinking in as I start a new chapter in my life with my family.”

As previously reported Yates will remain with the club in a role still to be confirmed, so it won’t be the last Matlock supporters will see of one of their favourite sons.

“All of the fans were fabulous last night and it was great to play in front of a good crowd particularly with our last competitive game when it wasn’t a great night for us getting knocked out of the FA Trophy at Coleshill with hardly anyone in the ground due to Covid. We all know Matlock have some very loyal fans, some have supported me wholeheartedly during all of my twelve years at the club rain or

shine. It was great to have the fans there at the game and it was particularly nice that I could say my thank yous at the end of the game.”

Yates also admitted a feeling of sadness in quitting playing.

“Of course it’s a sad time also, it’s not as if my body’s packed in or I don’t feel mentally right. It’s just a case of other things in my life now taking priority, at home and also in the next step of my career in my nine to five job.”

The former Gladiators club captain paid tribute to his family as he looked back on his time at Causeway Lane.

“I certainly wouldn’t have made it to 500 games without the backing and love from my Dad and my wife Rachel, they’ve been two constants in my life, They’ve given me great support, especially my Dad who in the early days ran me about and has attended most home games and a good number of Matlock away games. It goes without saying the support I’ve had from Rachel, there’d be no chance of me making 500 appearances without her always being there for me and giving me her full support.”

Yates believes he has stopped playing with the club in good hands.

“Phillo (Paul Phillips) is putting a decent squad together with possibly one or two more additions to come so things are looking encouraging on the field. Behind the scenes Bryn the Chairman is doing a fantastic job and the committee and all of the volunteers continue to do what they’re all so good at in keeping the club going, I take my hat off to you all.”

Finding a replacement for such a talisman could prove to be almost impossible such has been the impact he has made on everyone during his playing career with the Gladiators. He is Mr Matlock Town

Matlock Town manager Paul Phillips, although not in charge for Monday night’s 9-0 Wirksworth Centenary Cup win over Wirksworth Ivanhoe, said it was good to be back on the field again after the long break caused by Covid.

Gladiators fan Dave Apperley had bid to be in charge of the side leaving Phillips and his management team to look on.

“It was a game we needed after such a long time not playing, we were good in spells although all of the substitutions made things a bit disorientated” said Phillips.

“It was good for the lads to get minutes in their legs and get their timing right.”

Apperley enjoyed his ninety minutes running the show and was full of praise for the squad Phillips is putting together.

“They’re a very good set of lads, I enjoyed myself immensely, all of the staff and the players were excellent, it was a really good night. ”

As well as Ivanhoe celebrating their centenary, it was Matlock Town legend Adam Yates’ final appearance after twelve seasons and more than 500 appearances for the Gladiators.

It was a great night with Wirksworth celebrating their centenary and of course Adam Yates, captain on the night, getting such a fantastic reception from everyone which he fully deserves” Phillips continued.

“It was also nice to see people watching football again, enjoying themselves and then being able to mix in the bar as regulations at the moment allow us to.”

On the pitch Matlock matched the number of goals they scored in the corresponding game in 2020 when Ivanhoe managed one in reply. New

signings Alex Wiles, John Pritchard, Jonathan Wafula and Jesurun Ubechegulam all featured. Callum Chippendale was also due to start but pulled up in the warm -up although the diagnosis does not appear to be serious.

“We’ve no injuries from tonight, Chippy (Chippendale) wasn’t risked as a precaution after we’d had three hard training sessions in the past week, he said he felt a bit tight. I thought we looked fit, had a good intensity, the lads have looked after themselves which is testament to their commitment, “

Matlock now face two more home friendlies in the next week, with Boston United the visitors on Friday evening before Derby County under 23’s are in town on Tuesday night.

“It’ll be a different test on Friday and a game we’ll need. It’ll be a big physical test against a side in the league above who are expected to do well and have signed some very good players and have very good management and staff. I’d imagine that with our seasons starting on the same day, Boston will be at the same stage as us.”

Ryan Qualter and Jonathan Wafula will be facing one of their old clubs while Boston could include midfielder Jore Leesley who was popular with Matlock supporters in his time with the Gladiators under the stewardship of Mark Atkins.