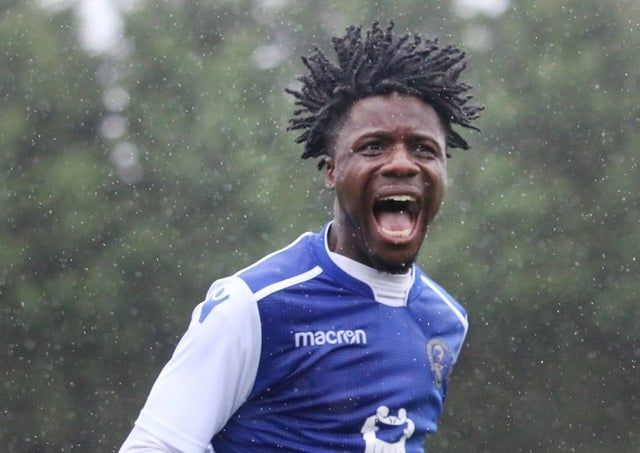 Matlock boss Paul Phillips has added to his injury-stricken squad with two additions ahead of Saturday’s home clash with Whitby Town.

Winger Jude Oyibo has come in on a month’s loan from Alfreton Town while central defender Ellis Roberts also joined the Gladiators.

Oyibo (21) is well known to Phillips having played for him in recent years at Stalybridge Celtic, Glossop North End and Buxton. He left the Silverlands for Alfreton last December having scored 8 goals in 49 appearances for the Bucks bringing an end to an eighteen months spell at Buxton since moving from Glossop.

Oyibo’s starting eleven opportunities at Alfreton have been limited, making two starts and five substitute appearances, coming on for the Reds in their recent Derbyshire Senior Cup defeat by the Gladiators.

A tricky winger with electrifying pace, Oyibo has had trials at West Ham United, Queens Park Rangers and Grimsby Town.

Phillips is pleased to be joining up with Oyibo again.

“He has a hell of a lot of quality and will drive us forward. He’s had over 100 games with me so he knows what I want and the way I work. He can drive you mad but he’s also got the ability to win a game on his own and can offer us a little bit more than the wingers we have now. He can operate on both sides and also play the centre forward role, I’m delighted to have him on board.”

Liverpool born and keen Liverpool FC fan Roberts (23) stands at 6’3” and has recently returned to England.

“Ellis has also played at Morecambe as well as being in America. He’s come to us from Southport, highly recommended by their manager Liam Watson. I’m not sure about the Liverpool bit, but he’s another good addition to the squad” said former Manchester United goalkeeper Phillips.

Club captain Adam Yates has come through Thursday’s training session after a bout of tonsillitis.

Matlock have today released midfielder Eliot Goldthorp who was on work experience with the Gladiators from Bradford City.

“Bradford said we could have him until the end of the season but Sunderland have come in and want to take a look at him and obviously that would be great for him. We wish him all the best but have told him that he would be welcomed back with us if things didn’t work out” added Phillips.

Goldthorp’s departure, and with Jon Stewart, Brian Wilson, Nathan Valentine, Spencer Harris, Jack Rea and Luke Hinsley all set to miss the Whitby match, Phillips may be tempted to bring in at least one other new face.

“I’m trying my best particularly as our midfield looks to have been decimated but there’s no point bringing anyone in unless they’re better than those we currently have.”