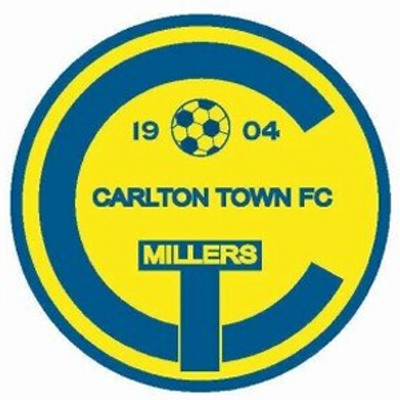 Steve Kittrick’s men looked to be cruising into the next round at the interval, two goals ahead and scarcely in trouble from the Carlton attack.

A Jordan Sinnott spot kick on 23 minutes and a neat Luke Hinsley volley two minutes later had put them firmly in command. But that changed in the second period. They nervously and fortunately negotiated their achilles heel period of the opening ten minutes of the second half when Carlton struck the woodwork and missed a couple of presentable chances.

After seemingly successfully weathering the storm, former Gladiator Tyler Blake halved his side’s deficit in the 68th minute to leave the Gladiators hanging on. Referee Matthew Jackson somehow found six minutes of added time with the trainers not having appeared once, but Carlton could not find an equaliser, Matlock’s first half performance proving to be critical.

Manager Steve Kittrick admitted Matlock had a poor second half. “I can’t understand it, we’ve just talked about it again in the dressing room. The lads don’t know why either especially after a very good first half when with no disrespect to Carlton, you could clearly see who the higher division team was. But credit to them (Carlton) for pushing us hard in the second half.”

So Matlock remain inconsistent within a game but from the other side of the coin, most fans would have taken a 2-1 away win at a team in form before a ball was kicked. Sinnott, Jack Rea and Marcus Marshall were all back in the starting line up replacing Josh Lacey, Spencer Harris and the departed Sam Scrivens from the team beaten at Radcliffe eleven days earlier.

Matlock began the brighter, Hinsley poking a low shot narrowly wide in only two minutes after a neat sequence of Matlock passes.

The visitors always looked the more classy side in the opening period, being thwarted for a spell by the offside flag and a faulty final ball. Their fans were encouraged though on 19 minutes when Marshall broke at pace on the right to cross deep for Hinsley whose header was blocked at point blank range by home custodian Jack Steggles.

But the Gladiators were soon calling the shots. Marshall cut into the box to be tripped by Daniel Fletcher and SINNOTT’s shot from the spot had too much venom for Steggles as it found the target in spite of Steggles getting a flailing hand to it.

It got even better as Marshall released Dan Bramall whose stinging shot was pushed out by Steggles and HINSLEY kept calm to volley home the loose ball.

Stewart was rarely being troubled at this stage, the only Carlton shot in the opening half hour being a tame strike by Danny Elliott which was comfortably gathered. Toby Moore’s header on 31 minutes dropped harmlessly over the bar but the Millers knew they would need to improve dramatically to provide their small band of fans with a cup upset.

Again Matlock’s start to the second half was a cause for worry, Stewart doing well to tip Niall Davie’s twenty five yard free kick on to the junction of post and bar. Blake and co striker Aaron Opoku were both off target when well placed and an Opoku cross skidded across the Matlock penalty box, this all by the 51st minute.

The introduction of Spencer Harris added graft and legs to the Gladiators engine room, Harris latching on to a Bramall pass in a fine break before he was eventually closed out by the recovering Millers defenders.

Dean cleared an Opoku header off the line but Matlock’s respite was shortlived as Carlton came again and BLAKE finished off a right wing cross from close range.

Carlton battled for an equaliser but the nearest they came was when an off balance Opoku sliced his shot wide in the 89th minute.

Matlock defended well in the closing stages and might have made the game safe ten minutes from time when Hinsley stretched to meet a Marshall cross, the referee awarding a goal kick when Hinsley’s effort deflected off Steggles. Hinsley received a caution for delaying the restart.

In the end it was much too close for comfort for the Gladiators, and much closer than it should have been , given their position of extreme ascendancy at the interval.