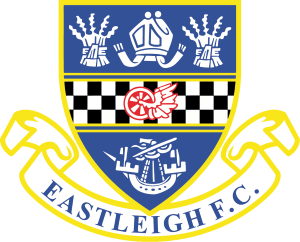 The battling Gladiators pushed their National League hosts all the way and probably deserved a replay from their FA Trophy last thirty two clash at the Silverlake Stadium.

Two lapses of concentration cost them after they could not convert two excellent chances to go ahead.

With virtually the last kick of the first half Cav Miley drove the Spitfires into the lead and within a minute of the restart Lewis Beale made it two. But Matlock rallied to halve their deficit through Marcus Marshall in the 69th minute and although Jon Stewart saved a 74th minute penalty, Matlock continued to probe to let Eastleigh certainly know they had been in a game.

Backed by a noisy one hundred plus support, Matlock dug deep early on with the windy conditions in Eastleigh’s favour.

Spencer Harris did well to head away a free kick from Jack Payne but neither goalkeeper was troubled until the 14th minute when Stewart did well to keep out a strike from Sam Smart. Eastleigh were utilising Smart on the right flank regularly but Smart often lacked quality with a number of crosses failing to find someone to finish off.

Matlock were frustrating their opponents of two divisions higher and Joe Partington went down unnecessarily in the Matlock penalty box and was fortunate to escape a yellow card for simulation.

The Gladiators began to find a foothold and should have gone in front when they missed a gilt edged 27th minute chance. Tomas Poole cut in from the left for his low shot to be pushed into Sinnott’s path by goalkeeper Ross Flitney but with the goal gaping, Sinnott skied his shot over the bar.

Stewart backpedalled to tip away a dangerous swirling centre from Smart but it was Matlock who went close again in the 33rd minute. Superb individual play from Marshall saw him cut through the home defence and Flitney proved to be Eastleigh’s saviour with a fine block save from Marshall’s low shot.

Tom Bearwish was high and wide from distance and just as it seemed Matlock would reach half time all square, Eastleigh struck the sucker punch to go ahead against the run of the play.

Luke Dean did well to clear his lines but Matlock failed to effectively close down MILEY who had time to measure a low cross shot into the far corner.

The whistle shrilled for the interval as soon as Matlock kicked off and there was worse to come for them after the restart, a forward move breaking down and the ball was played long to BEALE who marked his first Eastleigh appearance by driving forward to tuck his shot past an unprotected Stewart.

Bearwish did well to block a shot from Poole as most of the play was in the hosts’ half. The visiting support continued to be the most prominent and they were rewarded when Poole outpaced Partington, his low cross finding an unmarked MARSHALL who tapped into a vacant net. 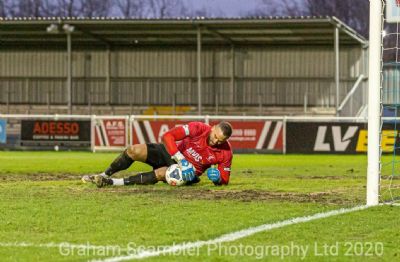 Poole was an ace away from converting a low cross from Adam Yates at the back post only ninety seconds later but the fightback might have been stalled had Carl Rendell converted from the spot after being brought down by Ben Gordon’s challenge. But Stewart was up to the challenge diving low to keep out the tame shot.

Flitney was ideally placed to hold a Marshall header as Matlock buzzed around the home penalty box but the rub of the green denied them. Eastleigh played on the break, substitute Tyrone Barnett seeing his shot deflected wide.

Eastleigh edged their way through but Matlock can be proud of their performance both on and off the park. On another day they would have been looking forward to at least a replay. As has been said on many occasions recently, they now need to replicate their FA Trophy form in league matches.

The ovation their fans gave them at the end was fully deserved.