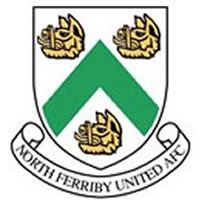 Matlock secured the win they needed so much from this crucial six pointer to move off the bottom of the table.

Craig Westcarr bagged a hat-trick with Marcus Marshall and Cleveland Taylor adding the others, Ferriby replying to Westcarr’s first two goals with strikes shortly before the interval from Jordan Harrison and Luke Hinsley before Matlock eased to victory in the second half. The Villagers finished with ten men when Ben Clappison picked up two yellow cards late on.

Town controlled and dominated the first third and final third of the contest, it was the bit in between that caused worry.

But this time it was all alright on the night as the Gladiators in the end won at a canter, but that middle portion of the game emphasised that boss Dave Frecklington still has some hard work ahead of him to make Matlock a force in the division.

Matlock began brightly, Davie having a shot blocked from a King free kick on the left with most of the play in the Villagers’ territory.

The Gladiators deservedly went in front on 11 minutes as Marshall, again a major threat in a central attacking position, recovered possession well from a dithering home defender to feed WESTCARR who turned smartly and fired a low firm shot past home custodian Lewis Exall.

Full backs Taron Hare and Davie were venturing forward at every opportunity, a long throw from Hare causing confusion in the home ranks but falling inconveniently for the Gladiators’ attackers.

Matlock looked to be coasting to a big score when WESTCARR doubled the lead on 19 minutes, shooting low under Exall after again Marshall had created the opportunity with a great but simple pass. There were clear signs that Marshall and Westcarr might be able to forge a fruitful striking partnership.

Matlock continued to hold the upper hand but when Harrison’s thirty yarder was comfortably saved by Ross Durrant on 34 minutes, it gave the so far outplayed hosts some belief.

For some reason Matlock retreated and a Charlie Dunkerley long ranger bounced nastily just in front of Durrant who scrambled the shot to safety.

When Town surrendered possession in the Ferriby half soon afterwards, the hosts broke quickly for Eddie Rogerson to feed HARRISON who slipped a calm finish past Durrant to halve the deficit in the 39th minute.

Suddenly Matlock looked vulnerable again and a crossfield pass found Harrison on the right and an incisive low ball towards the near post was converted by LUKE HINSLEY in stoppage time to amazingly bring the scores level.

Ferriby were most probably favourites to win now, but whatever was said in the Matlock dressing room during the break most certainly had the desired effect!

After a quiet start, Matlock lost Dwayne Wiley through injury but went back in front in the 57th minute, this time Westcarr being the provider for MARSHALL who headed home a right wing cross from close range.

Now could Matlock be resolute at the back to confirm victory? They didn’t have to be as the confidence displayed earlier returned to flood throughout the team.

Beevers was slightly too high with a header from a Davie cross before captain TAYLOR scored a 65th minute cracker, blasting into the top corner from the edge of the box after more tremendous approach play by Marshall on the right.

The woodwork was then struck twice as Matlock hunted more goals, substitute Jake Green’s daisycutter rebounding off a post and an inswinging Davie corner being helped on to the bar by Exall.

Marshall, looking two yards offside was then brought down in the box only for the referee to wave away stonewall penalty appeals but he could do little other than point to the spot in the 83rd minute when the excellent King was brought down and WESTCARR tucked away the spot kick with aplomb for his hat-trick goal.

Ninety seconds later Westcarr flicked wide in a one on one with Exall from Green’s pin point pass before Clappison went for his early bath having clattered into King and Marshall in quick succession, the second foul resulting in a melee as Ferriby became frustrated having been outfought and outplayed. It was men against boys at the end.

So Matlock can earn a seven out of ten for a mostly commanding performance. Ferriby were there for the taking and Matlock did what was required but know they cannot keep on conceding soft goals as they did once again on Tuesday. It was a game they dare not lose. They got the desired outcome, now they must build on the victory with two home games next.