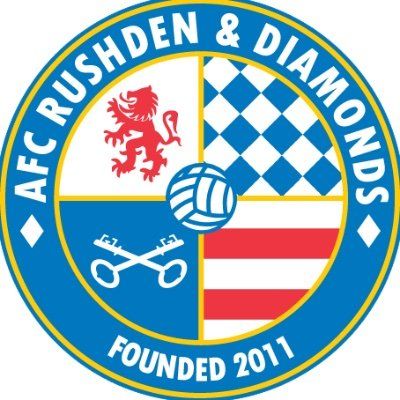 Matlock made progress in the FA Trophy with this victory over their Southern League Premier Central visitors, but a failure to put the game to bed nearly cost them as Rushden threw everything at the hosts in a late revival.

All three goals came in the second half, all three were quality efforts A worldie from Alex Byrne and a calm finish from substitute Jesurun Uchegbulam had put Matlock seemingly in control, but other chances had gone begging. Ravi Shamsi hit back with a fantastic twenty five yarder with seven minutes to go to make it a nervous finale. The visitors hit the woodwork as Matlock hung on to bag the £2750 prize money.

Paul Cooper was given a start between the sticks in place of Shaun Rowley with Matty Sargent replacing Alex Wiles in midfield. Jerome Greaves came in for Jamie Cooke, Halifax not allowing the loanee to play in the FA Trophy. Liam Hughes was eligible due to his suspension only covering league matches.

Byrne came close to giving Matlock a 3rd minute lead his low shot being cleared off the line by Patrick Casey, this being quickly followed by Greaves firing at goalkeeper Dean Snedker from close range.

At the opposite end, Shamsi glanced wide when well placed and Tom Lorraine had the ball in the net but the referee ruled the effort out.

Greaves missed a gilt edged chance to open the scoring on 10 minutes when Callum Chippendale helped on Reece Kendall’s cross from the left, Greaves had the goal at his mercy but somehow missed the ball altogether, much to the visitors relief who happily accepted the goal kick.

The chances dried up for a spell. Byrne drilled a free kick against the defensive wall and Hughes nodded wide before Diamonds put together a neat passing move which ended disappointingly with Connor Furlong firing yards over the bar.

Matlock upped the tempo again for Hughes to head over from a Byrne free kick and Kendall to have a well struck shot blocked by the visiting defence, the half coming to a close with Hughes again heading too high.

Cooper was called upon in the first chance of the new half, doing well to keep out a deflected strike from Shamsi, the action quickly switching to the Rushden end, Snedker pulling off a fine stop to keep out a Hughes header before Ioan Evans saw his header kept out comfortably by Snedker.

Then it was Cooper in the heart of things, Shamsi’s inswinging corner from the right being superbly saved.

Matlock made a double change soon afterwards, Greaves and Lees being replaced by Uchegbulam and Liam King and within a couple of minutes Matlock were in front thanks to a stroke of genius from Byrne. Ryan Hughes stretched to head aaway a long punt forward but it dropped to BYRNE who had spotted Snedker off his line and he instantly lifted a thirty five yards lob over the helpless custodian for a candidate for goal of the season.

In the next breath Uchegbulam had broken clear of two defenders only to be thwarted by an excellent Snedker save, Kendall heading too high from the resulting corner.

But UCHEGBULAM would not be denied as on 62 minutes he was up against Snedker in a one on one duel which he won easily by lobbing the ball over him for another great finish.

The substitute could have ended up with a hat-trick as shortly afterwards he shot narrowly too high.

Cooper could be pleased with his debut as on 70 minutes he made a fine save to deny Fernando Bell-Toxtle as Rushden sought a way back. He then got a crucial touch to another strike, this time from Shamsi to conceded a corner which Hughes headed away from danger.

But the tie should have been well and truly settled with fifteen minutes left as Uchegbulam raced down the right to square for Hughes who somehow lifted his shot over a gaping goal.

Sensing there may yet be something for them from the game, Rushden poured forward and SHAMSI struck a belter from twenty five yards that ripped into the far corner with seven minutes remaining.

Shamsi’s excellent cross caused more problems for Matlock who were happy to concede a flag kick and captain Alex Collard’s header rebounded off a post.

Most of the 533 crowd were happy to hear Ashley Royston blow the final whistle with the game finishing much closer than it should have done. The punters though had seen a decent game and three marvellous goals.