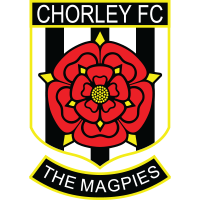 Matlock were within four minutes of an FA Trophy shock before a rather fortunate equaliser from the Chorley brought about a replay at Victory Park this coming Tuesday.

The Gladiators had surged into a two goal lead through Spencer Harris and Luke Hinsley before a soft reply from Ntumea Massanka cut into the homesters advantage. After a handball resulted in a second yellow card for Michael Smith, his team mates rallied instantly and substitute Chris Holroyd, looking suspiciously offside swept in a scuffed finish from a mishit ball into the penalty box.

It proved to be an anti-climax following a good Matlock performance with Chorley officials admitting they had got out of jail with an offside goal. Their manager Jamie Vermiglio admitted to being relieved.

“I’m relieved to get something after not playing particularly well. At least the lads showed character to battle their way back. I’m not happy with the overall performance but credit to Matlock who played well showing tremendous determination and desire.”

Vermiglio’s opposite number, Steve Kittrick said the outcome was disappointing but he was pleased with the performance after the 5-2 defeat by FC United of Manchester seven days earlier.

“I’m disappointed after the way we stuck to our game plan although we found it difficult to get out towards the end. We could have dealt with the first goal better and the kid’s offside for the second goal. We’ve done well, we were organised to frustrate them, we’ve got to go there on Tuesday and do the same again. I’m massively happy with our performance, we were very good competing with a Conference side for long periods. We’ve got to be positive on Tuesday as we were today.”

Clear chances were scarce in a scoreless opening half, Tomas Poole stretching to force an Adam Yates cross over the bar in the 12th minute before five minutes later Poole drove wide after a Marcus Marshall knock down.

Massanka was harmlessly wide with two speculative overhead efforts while a mishit shot from Mark Ross needed a tip over from Dan Wallis to stop it from sneaking just under the bar. The resulting corner saw Josh O’Keefe sneak in to head wide.

The half ended with Poole sprinting down the left, his cross eluding the onrushing Hinsley at the back post.

A neutral would not have been able to distinguish between the hosts and Chorley in terms of league status, Chorley being two levels higher in the pyramid.

The first indication of a shock came within ninety seconds of the restart when from a corner on the right, Hinsley headed goalwards, Marshall lashed at the ball and in the confusion, HARRIS got the vital last touch as the ball found the net.

Masaanka nodded wide as the Magpies sought a swift response before an ambitious first time strike from Poole on the run from distance bounced wide in a fine Matlock break.

Yates was forced to withdraw with hamstring trouble on the hour as Matlock had to reorganise with Harris dropping to full back and Dan Bramall being introduced on the left flank.

Six minutes later Matlock looked to have booked their place in the last thirty two as Bramall had an almost immediate impact. He scampered down the left to deliver a teasing pin point low centre which HINSLEY expertly finished.

Chorley put Matlock under increased pressure and with twenty minutes remaining they halved the lead with a soft finish by MASSANKA , his initial header being blocked but the rebound falling kindly for him to force home.t.

Their goalkeeper Danny Eccles was forced into a last ditch challenge on Poole while at the other end Carver dug out an opportunity for himself but stabbed wide.

After Smith’s dismissal came the heartbreaker for Matlock as a scuffed shot from Louis Dodds was travelling yards wide until Holroyd, who looked to have mishit his shot himself scooped the ball into the far corner with Matlock claiming offside.

Chorley will now consider themselves favourites on their home turf but will go into the game massively relieved at getting a second chance. On the day Matlock deserved to go through.