Matlock’s best performance of the season and their best win.

In form, Whitby had won their last eight and league and cup matches, they had kept clean sheets in their last six outings, but those statistics meant nothing as far as Matlock were concerned. Steve Kittrick’s men gave a thoroughly professional performance as the Gladiators earned a third successive win at the Turnbull Ground, scoring three goals each time.

It was second versus fifth before kick-off, these excellent three points seeing Matlock rise to third spot. Whitby must have played better in their tremendous victorious run, but take nothing away from Matlock who put in a fantastic performance. Matlock were simply too strong and streetwise for Whitby on the day.

Whitby had possibly shaded a tight first half, but as the game developed, Matlock wore the hosts down. Goals immediately each side of the interval from Dan Bramall and Luke Hinsley certainly aided their cause, the icing on the cake coming late on as top scorer Marcus Marshall netted his sixth goal of the season.

Kittrick made three changes to his line up, Hinsley, Josh Lacey and Jordan Sinnott coming in for the injured Adam Yates, the departed Andrew Wright and the injured Piteu Crouz. Latest signing, striker Sam Scrivens, on a month’s loan from Guiseley was a substitute.

Seasiders’ skipper Dale Hopson fired wildly off target following a through pass from Matthew Dixon in the 3rd minute, the visitors replying four minutes later as Sinnott’s shot was blocked from a well-worked corner, Marshall kicking fresh air from the rebound.

The lanky Arran Wearmouth headed a great opportunity too high from six yards, Hopson the supplier from the right ten minutes later before a quiet period followed.

Then chances were traded by both sides, Jon Stewart denying Adam Gell, Marshall’s twenty yarder flashing inches past the upright and Stewart comfortably holding a shot on the run from Bradley Mills.

With the half looking destined to conclude scoreless as stoppage time began, Matlock struck a crucial blow, Marshall escaping down the right having done well in his deeper role, his low cross eluding Hinsley but not BRAMALL who forced the ball home.

Whitby were dealt two injury blows losing Hopson and defender Luke Bytheway before the second half started and three minutes in they were in deeper trouble.

Marshall was fouled a couple of yards outside the penalty box and after Sinnott’s free kick was deflected on to the bar, HINSLEY reacted quickest to nod home from a yard out.

A Marshall strike was blocked and Bramall’s low cross from the left was scrambled clear before a Spencer Harris effort lacked power as Matlock looked in complete command. 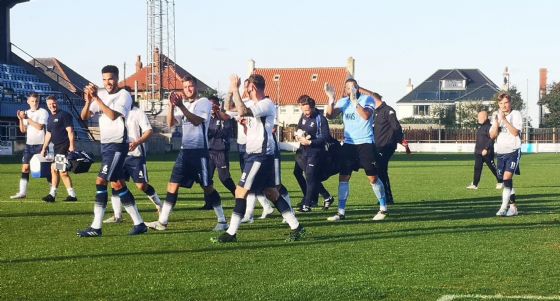 But the men in white and navy had an escape on 71 minutes, Stewart making a brilliant save to keep out substitute Matty Tymon’s shot before wing-back Mills tried his luck, his shot dropping wide.

But that would be the final Whitby threat as Matlock absorbed the diminishing Seasiders’ threat to look dangerous on the counter-attack.

Scrivens immediately looked a threat and with virtually his first touch, he forced Shane Bland into a marvellous fingertip save to force the ball over the bar and Bland soon kept out a fierce Bailey Gooda strike.

But the travelling fans were cheering again on 88 minutes, MARSHALL cutting through the home rearguard to shoot low off a post and ensure a brilliant Matlock victory.